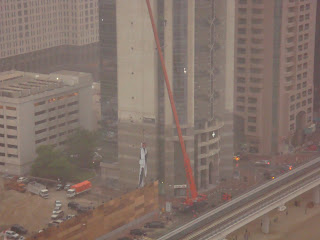 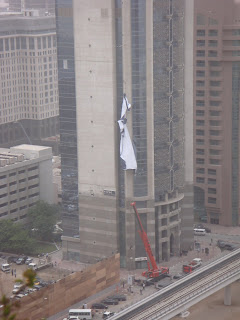 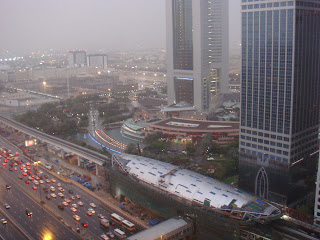 The current wet weather in Dubai has been accompanied by bursts of strong winds which saw a huge digital print hanging from a prominent building on Sheikh Zayed Road Monday. It was later carefully taken down by workmen under the watchful eyes of the Dubai Police. The bad weather is expected to continue through Tuesday.
Forecast from Weather Underground
These pictures of the torn digital print show the pain brought about by the inclement weather in Dubai adding to the woes occasioned by the economic crisis. For those counting cars however, the news is that traffic in Dubai has seen a marked increase from January this year.
Outdoor activities including construction work on the Metro are also affected by the weather. At the Metro Station near Emirates Towers workers are normally seen working thorugh the night under fllodlights. The lights were off and the workers nowhere to be seen as the gusty winds and driving rain slowed traffic on Sheikh Zayed Road, Tuesday evening.
Posted by Ranjit J Perera at 8:57 PM